The coronavirus has taken hold of the world. All travel to the U.S. from Europe by non-US citizens has been halted for 30 days, the NBA has suspended the 2019-20 season, Greta Thunberg has moved her strikes online, and countless other events have been canceled in the wake of the pandemic.

In the midst of the outbreak, it's hard to know what to think. According to the Centers for Disease Control and Prevention (CDC), "information so far suggests that most COVID-19 illness is mild [... but] the complete clinical picture with regard to COVID-19 is not fully known." Political factions have also created two versions of the same story.

However, we wanted to know what people think. Our question was simple: How is everybody feeling right now? Staance surveyed more than 2,000 Americans about their fear of the virus, how they think the media is handling the problem, and what precautions they've taken (if any). Plans have been canceled; cash has been spent – life is currently on pause. Keep scrolling to see what's going on in the minds of Americans amid the coronavirus reaction.

So, how afraid is our nation of the coronavirus? Sixty-four percent think the media created unnecessary panic with their coverage of the virus, and 61% believe the American public was overreacting. Democrats were more trusting of the media and 22 percentage points less likely than Republicans to think the media was causing unnecessary panic. This may also have to do with geography, as our study showed that people were more likely to fear COVID-19 if it had spread to their area, and three blue states (California, Washington, and New York) have the most confirmed cases so far.

That said, 49% of all Americans are afraid of contracting the virus, and 17% thought they would catch it within the next month. Millennials and Gen Xers are most afraid of contracting the virus, while baby boomers didn't seem to feel quite as much panic. Perhaps they're taking more precautions that make themselves feel less afraid, as this generation is more at risk of severe reactions than their younger counterparts. 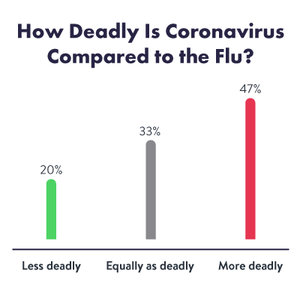 Baby boomers were also the most likely to believe the coronavirus was more deadly than the flu (51%). Even though it feels like COVID-19 has gotten much more media coverage than influenza, the flu claims anywhere from 12,000 to 61,000 deaths in the U.S. every year. Far fewer deaths have resulted from the coronavirus in the U.S. so far.

That said, "doctors and scientists are working on estimating the mortality rate of COVID-19, but at present, it is thought to be higher than that of most strains of the flu." Forty-seven percent of respondents thought this to be true as well. 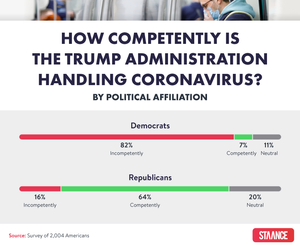 Perhaps the least surprising part of the outbreak is that Republicans and Democrats disagree about the handling of the virus. Most Republicans (64%) felt great about how Trump was handling the coronavirus, but most Democrats (82%) voiced the opposite sentiment.

Trump's most recent address is said to have "sparked chaos," with the EU expressing frustration that they weren't notified about the travel ban. Republicans, who were more likely to think the media was causing unnecessary panic, seemed fine with the way the administration was handling the outbreak. But it's not just Democrats that are critical of the current administration, prominent Republicans have also criticized the lack of clarity in the president's recent address. 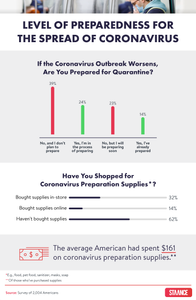 Preparedness for a quarantine is top of mind for many during this outbreak. Local stores have been running out of supplies like toilet paper and water, while masks have become hard to obtain in some hospitals.

Our study showed that only 39% of Americans didn't plan to prepare for quarantine. Thirty-eight percent had already prepared or were in the process, and another 23% said they would start to prepare soon. Many (32%) even risked the crowds and hit the stores to buy supplies, but 14% stayed with online shopping. Of all customers who prepared in some way, however, an average of $161 was spent, including on everything from extra food to hand sanitizer.

Cancellations Due to COVID-19 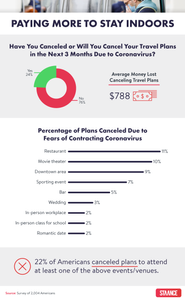 While sentiment is changing by the hour, at the time of this study, a surprising majority of Americans (76%)said they didn't plan to cancel any of their travel plans within the next three months due to the virus. That said, they may not have a choice if certain travel restrictions aren't resolved shortly. And people have already lost an average of $788 from canceled plans.

The coronavirus prevented roughly 10% of people from keeping plans at restaurants, movie theaters, and any downtown areas. Although the majority of respondents were still happy to keep their plans, the vast number of cancellations and the public's reaction are certainly having a negative impact on economic markets and businesses. Restaurants and other local businesses are having to look to the government for help in these volatile times.

Airlines are also taking a major hit –Norwegian Air has already suspended half of its staff, and other employees are starting to fear for their jobs as well. Among our more than 2,000 participants, millennials and Gen Xers were much more likely than baby boomers to cancel their flights. This may relate to baby boomers being less afraid of the pandemic.

At the risk of reminding you of what you already know, it's better safe than sick. Take this forced hiatus to take care of yourself and your loved ones. The data we gathered from Americans ultimately shows us that people are preparing even if they're not overly afraid of COVID-19.

At Staance, our mission is to organize the world's opinions and make them useful, reliable, and accessible to everyone. We plan to continue to provide useful insights throughout the duration of this unprecedented pandemic to help the public make informed decisions.

For respondents to be included in our data, they were required to complete the entire survey, take the survey only once without multiple attempts, and pass an attention-check question in the middle of each survey. Participants who failed to do all of these were excluded from the study. The study was conducted from March, 6, 2020, through March 8, 2020.

The data presented relied on the self-reporting of 2,004 Americans about their perceptions of COVID-19 and experiences with preparing for its increased spread, by Prolific and Amazon Mechanical Turk. There are many issues with self-reported data. These issues include, but are not limited to, selective memory, telescoping, attribution, and exaggeration. In finding averages of quantitative values, we removed outliers so that data were not exaggerated.

Spread knowledge, not germs. Share this article and the evidence it contains, but be sure your purposes are noncommercial, and you link back to this page.